Even those of us who were born in the ancient times of America’s mid century have only vague recollections of what automobile travel was like before freeways and interstates came into existence.  Just to refresh our collective memories, here’s a peek at what setting out for a mountain vacation might have looked like in 1958, the year my father in law, Harvey West, Jr., purchased a ghost town called Graeagle.

It’s no wonder that most visitors from the San Francisco Bay Area and points beyond chose the luxury of train travel.

But before the California Gold Rush brought the first non-native settlers in droves to Mohawk Valley at the foot of gold rich Eureka Peak, getting here was an unimaginably difficult trek on foot through unexplored treacherous terrain accompanied by pack mules.

One man, Thomas Stoddard, in the process of running for his life from hostile natives and by becoming hopelessly lost, could be credited with causing the first inroads into our aptly named Lost Sierra.

While Mr. Stoddard was probably the least qualified frontier guide of his day, he did excel at promotion.  Upon his first narrow escape from well armed, angry pursuers (but certainly not his last) he managed to find his way back to the settlement at Nevada City, babbling a fantastic, hard to believe tale. In his travels he had discovered  an entire lake filled with gold, and he produced a bag of gold nuggets to prove it.  His presentation must have been remarkable, surpassing all reasonable doubt, because he convinced, not just a few gullible souls, but somewhere in the neighborhood of 1000 men to pay him for the privilege of following him back to his discovery.

While awaiting the snowmelt, something of a snowball effect occurred around Stoddard’s tale and in June of 1850, a virtual army of fortune seekers set out from Nevada City to the divide between the North Yuba and Middle Feather rivers, and followed the ridge to the head-waters of that stream (Sierra Valley).  From there on Stoddard’s followers wandered in an aimless fashion which Stoddard convinced them was a ploy to throw off spies.  However enthusiasm severely waned when, weeks later, and at a point of near starvation,…

…the members of the expedition collectively wised up and gave Mr. Stoddard an ultimatum: Either get us to the lake of gold by tomorrow or we’ll string you up on one of these abundant and conveniently located trees.

In other words, they were so mad they could just choke him!

Exit, Thomas Stoddard. Under cover of darkness that night, he made good his escape, avoiding messy frontier justice. The ease of his escape from the angry mob seems questionable until you consider the fact that gold prospectors were also notorious drunks.  He probably just waited until everyone passed out.

The location of Stoddard’s “last chance” is said to be near what is now known as Delleker, formerly Humbug Valley, just down the road apiece from

Among the members of Stoddard’s ill-fated expedition was another frontiersman who probably knew better, but couldn’t resist a great tall tale, James P. Beckwourth, an emancipated African American who had wandered the territories under many guises, not the least of which was as a Crow tribal war chieftain.  So yes, he knew better.

Many emigrants were seeking a better westward passage through the Sierra.The Donner trail as we all know definitely had its drawbacks due to its snowbound elevations, while the Lassen Trail to the north was exceedingly long and arduous.  James Beckwourth, using the Stoddard expedition as home base, made his own discovery, one more valuable to our existence here in Graeagle than any mythical lake of gold.  Noticing a lower elevation pass at 5000 feet at the opening to the Sierra Valley, James Beckwourth proceeded to develop what would become The Beckwourth Trail, a much easier passage from what is now Reno, Nevada to the thriving settlement of Marysville, California.  Mr. Beckwourth established a trading post near what is now his namesake town of Beckwourth. 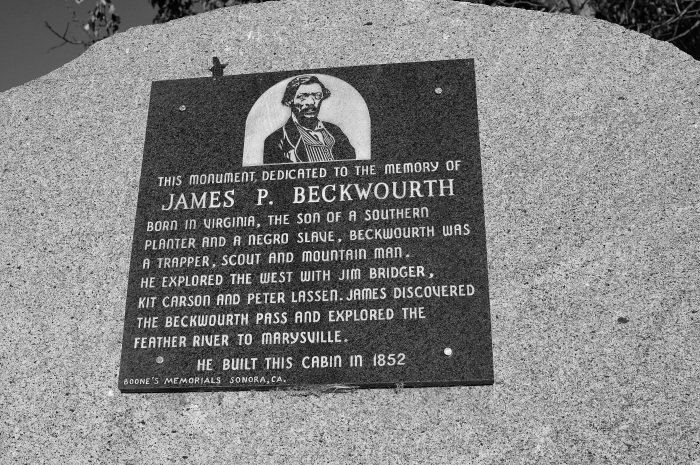 The Roads to Graeagle Circa 1958

One thought on “Are We There Yet?”