I’m sure you’ve all seen time lapse sequences of traffic patterns like this one.

But in light of recent tragic events which seem to repeat over and over again at times and places that can never be foretold, these combined images seem to be pointing to something more than pretty lights and psychedelic motion. To me they seem to replicate the organization,at its most cellular level, of the human body, the ebb and flow of the life force, the constant exchange of blood and oxygen, the rhythm of heart and lungs. Don’t traffic reporters refer to freeways as “main arteries”?

But take a moment, look down at your right hand, focus all your mental energy on it and tell it to move. You can scream as loud as you want, but it’s not you that initiates the movement. What does?

Is is possible that we could just rest with the fact that we don’t know?

Every day, practically everyone you know goes out their door, gets in their car and drives off to somewhere. As soon as we turn the key in the ignition we become part of the collective act of driving, something we have learned. As each vehicle and individual driver merges onto the freeway they become the collective movement known as traffic. Engineers have designed these thoroughfares to provide the safest and most resistance free surface for vehicles to travel, but once the construction has been accomplished what keeps all those vehicles from just  swerving about in a spontaneous frenzy of confused direction. Do you really believe that any single driver could have the intelligence to choreograph and direct such a dance and maintain it for more than an instant in time? How many seriously expert drivers do you know?

We all are aware that at any given time probably most of the drivers with whom we face off in those infinitesimally small lane separations, hurtling at 60 mph in opposite directions, are only marginally conscious, let alone in control of the missiles they occupy.

We should be terrified, but we’re not. Why? Because we believe in HAL.

We’re all just guys named Dave who depend on the infallibility of the life support system which somehow translates into the belief that everything will work, we’ll all make it home safely, no one gets hurt.

If we were really being honest with ourselves, we would be doing this every time we made it up our driveway at day’s end:

Today is my birthday.  I will celebrate in the traditional way with cake and candles. This tradition, as all traditions go,  has its origins as a Celebration of Life, a lighted candle for each year I have been fortunate enough to complete.

The cake will be presented, the candles will be lit and I will make the wish that we all secretly make and never tell: That it will never end.

Then I’ll muster up all my breath and blow those candles out, a gentle reminder that everything ends. 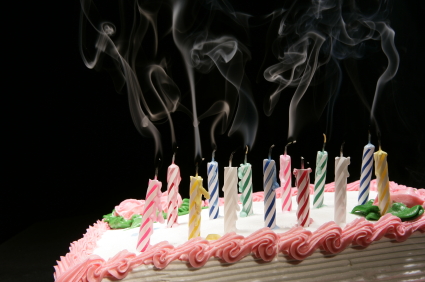 And so the feast begins.

One thought on “Flow”