Highway 89 aka The Trout Route *

(*depending on where you’re from, that may/may not rhyme) 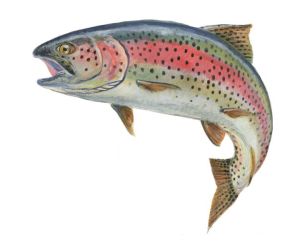 Visitors to Graeagle are very familiar with the phrase, “The Wild and Scenic Feather River”, but few are aware of the significance of this phrase, and many I daresay write it off as just a tourist board slogan.

In 1968 the Middle Fork of the Feather River was one of the first rivers in the United States to receive a “Wild and Scenic” designation from the federal government and it is managed by the U.S. Forest Service. Wild and Scenic means protected and preserved for the enjoyment of all, for all time. Wild and Scenic is where I live.

Wild and Scenic does not necessarily mean inaccessible.  As a matter of fact, the Middle Fork of the Feather River is divided into three distinct zones offering levels of Wild and Scenic experience from deck chair to daring wilderness adventure along its winding course.

The first section is aptly named the Recreational Zone, and wouldn’t you know it???…My Front Porch sits smack dab in the middle of the winding 65.4 mile course the river takes from its headwaters in the Sierra Valley near Beckwourth westward to the town of Sloat.

And the fishing is world renown!

In a recent article which appeared in California Fly Fisher Magazine, Jon Baiocchi, an expert local trout fisherman and guide, calls the Middle Fork,…“a real sweetheart, with a charm and personality all its own.” He goes on to name the many species, including brown trout, largemouth bass, smallmouth bass and carp in addition to the prized rainbow trout that can be fished out of these waters.

Make no mistake, just because it’s easy going doesn’t make it any less wild.  All species that flourish in the mountains can be seen in and around Graeagle, it’s just a great deal more unlikely that you’ll encounter any real danger clambering for a view.

Why just a few weeks ago, during the Memorial Day holiday weekend, I observed a David Attenborough-worthy drama while sipping a latte on the deck of The Graeagle Outpost.

In May the annual Graeagle Children’s Fishing Derby is held at The Millpond. Prior to the event, Graeagle Land and Water stocks the pond with trout from a local hatchery. This year no sooner than the last fishtail had splashed and disappeared into its new residence, a huge flock of pelicans descended on the pond. They made it clear they were not about to respect the official derby start time and began fishing in earnest. We feared the pelicans would Grinch the derby.

We need not have worried. As it turned out, these were mostly lovesick pelicans in the mating season. The well stocked pond, while providing a tasty appetizer or two, had become the pelican version of a single’s bar.

After a day or two of romance, satisfied pelicans flew off to attend to family matters and the Fishing Derby once again gave the kids the time of their lives.

Except for this guy… 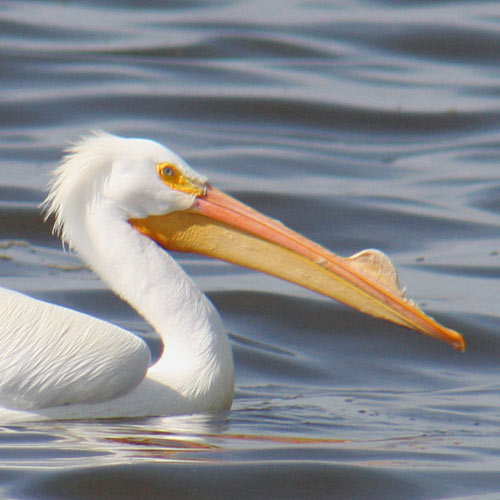 We all know the type..afraid to commit, yet never wanting to leave the party. See that funny rudder looking thing on the end of his beak? That’s called a “breeding bump”. That’s how you know what’s on a male pelican’s mind.

Back to me and my latte on a warm Saturday morning one week after the derby:

I’m watching this solitary pelican, let’s call him Mortimer, swimming in small circles at the edge of the pond, occasionally poking his nose under the surface for a look.  Immediately behind him on the shore kids with poles, worms and bobbers are hauling fish out of the pond with gleeful abandon.  Adult fly fishers are practicing their casts and as a bonus are actually catching a few as well.

Then from a cloudless blue sky, plummeting, wings tucked, talons down, an Osprey.

Instantly the raptor is airborne, a wriggling rainbow in his clutches.

And what does poor Mortimer do? He rushes to the center of the now fading water ring, the spot now absent that fish or any fish probably for quite a while. He pokes his nose down indignantly…a fowl calling a foul. Then with ungainly, insulted style, Mortimer hoists himself off the pond, circles once or twice and disappears.

As any fisherman will tell you, sometimes you catch ’em, sometimes they get away, but life is the story you tell and you’re lucky if a river runs through it.