Yay! Today is the start of the 2014 Winter Olympics. I love the Winter Games, I guess I’m just a snow bunny at heart.  But there is another reason why the Winter Olympics is my absolute favorite sports event, and that reason is very close to my heart, the heart of Graeagle…I’m looking at it right now from My Front Porch. 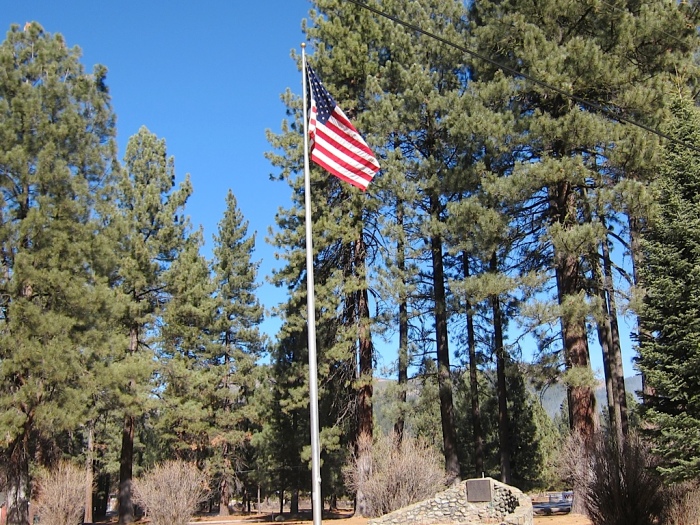 Yes, it’s a flag atop a very tall flagpole, a not uncommon sight in towns, cities and municipalities throughout the United States.  You might pass it by without a second glance.  But look a little closer.

A little closer (click on the photo if you still can’t read it)…. 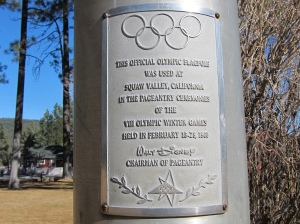 Yes! This flag flies atop a very special flagpole.  This very flagpole was one of the flagpoles that encircled the ice rink at the 1960 Winter Olympics in Squaw Valley, California!  For those of you who are not acquainted with our local geography, Squaw Valley is about an hour’s drive from My Front Porch.  The 1960 Winter Olympics put Squaw Valley, and most of Lake Tahoe for that matter, on the world radar of top destinations for winter sports.  The West family  recognized the enormity of the impact that this event was about to have on the best kept secret in the Sierras, the tiny resort town that would soon become the favorite mountain playground for city dwellers in northern California…..Graeagle. Here is the story of how this very special, very enormous flagpole made its way to Graeagle as told by Harvey West Jr. 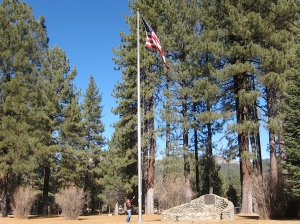 Per Harvey West Jr. (3/23/08)
“I was in my office when Don Mason, the Park Ranger at Plumas Eureka State Park came in and said that they were selling the flag poles that were bordering the oval ice rink at Squaw Valley during the 1960 Olympics.
I spoke with my dad (Harvey West Sr.) in Placerville and we agreed to purchase 3 flag poles @ $600 each.  They are 54 ft. high and come apart in three sections.”
Those flagpoles are standing today:
One at City of Santa Cruz in Harvey West Park;
One at the Athletic Field at El Dorado High School in Placerville
One in the Park Downtown Graeagle”…..

So there you have it.  Next time you pass by My Front Porch, give a glance across the street and a salute to that flag, that Glorious Flag!
And guess what!?  I’m looking out my window as I conclude this post….IT’S SNOWING!

The long snow drought of 2014 appears to be over so, LET THE GAMES BEGIN!